Coccidiosis is a highly contagious sporozoal infection in rabbits, with low prognosis of healing. It is caused by a protozoal parasite, Eimeria sp.. As many as 25 species of coccidia have been observed in the gastrointestinal tract of the rabbit; it should, however, be noted that in some cases, one and the same coccidia has been given several names. Eimeria sp. parasites are highly host, organ and tissue specific and do rarely represent a zoonotic danger for human beings.

Healthy rabbits can be asymptomatic "carriers" of the protozoa. The oocysts (eggs), shed with the feces, will contaminate the environment, food and water. Although the disease occurs essentially in intensively managed animals, especially younger ones, it appears also in well cared for rabbits. General hygienic measures indicate that rabbits should be given a dry rather than moist pellets, washed fresh vegetables and plenty of fresh water; in these conditions coccidiosis in unlikely to appear. When several rabbits are housed together, it is recommended to avoid putting food on the ground or to let several rabbits eat each other’s soft cecals.

The parasite has a life-cycle, which lasts 4 to 14 days. It starts after oral ingestion of food contaminated by oocysts. The oocyst wall will be broken down in the stomach and spores will be released. The presence of biliary and pancreatic enzymes in the duodenal portion of the intestine stimulates the spores.

After actively entering the cells lining the intestinal wall, the spore will start to divide asexually during one or more stages (schizogony). "Merozoites" (stage of development) will be released to infest other cells of the intestinal mucosa. The final stage of schizogony leads to the formation of gametes, enabling sexual reproduction. Oocytes are shed in the feces.

The asexual and sexual stages differ often in their location, organ and tissue specificities.

The presence of coccidoa will affect the hosting cell; some are inhibited in their function, other are hypertrophied. Induced villi atrophy will lead to malabsorption of nutrients, electrolyte disbalance, anemia, hypoproteinemia, and dehydration due to the epithelial erosion and ulceration.

The severity of coccidiosis depends on the number of ingested oocytes. Clinical signs are reduced appetite, depression, abdominal pain and pale watery mucous membranes, but they can be absent in older rabbits. Inspection of the feces often reveals blood and threads of mucus. Young rabbits present a retarded growth, due to side effects on the kidney and the liver in particular.

Hematological studies show a reduced hemoglobin and RBC count, accompanied by a significant increase of PCV and total WBC. Serum analysis show decreased levels of sodium and chloride, and increased levels of potassium. This electrolyte disbalance can be attributed to diarrhea. Serum calcium, iron, copper, zinc, and glucose are usually slightly lower than in healthy animals and may indicate malnutrition due to intestinal damage, or secondary bacterial infection. Liver coccidiosis is accompanied by significant elevation of serum bilirubin, alkaline phosphatase (ALP), alanine aminotransferase (ALT) and aspartate aminotransferase (AST), and gamma glutamyl transpeptidase (GGT). Values return to normal after appropriate treatment.

The intestinal form of coccidiosis mainly affects youngsters from the age of 6 weeks to 5 months and is attributed to stress, noise, transport or immunosuppression. It is mainly observed in young newly weaned rabbits, but is also found in older rabbits.

Symptoms are a rough coat, dullness, decreased appetite, dehydration, loss of weight and (profuse) diarrhea, 4 to 6 days post-infection. If the loss of weight reaches 20%, death follows within 24 hours. It is preceded by convulsion or paralysis. During necropsy, inflammation and edema are found in the ileum and the jejunum portions of the intestine. It is sometimes accompanied by bleedings and mucosal ulcerations.

The liver form of coccidiosis affects rabbits of all ages. It is characterized by listlessness, thirst, enlarge, and wasting of the back and hindquarters, with enlargement of the abdomen. On abdominal X-rays, the liver and liver and gall bladder appear enlarged.

This form of coccidiosis runs either as a chronic course during several weeks, or it ends in death within 10 days, preceded by coma and sometimes diarrhea.

At necropsy, liver, gall bladder and bile duct are distended and enlarged. White nodules cover the surface of the liver. The protozoa can be found in the liver and biliary ducts. An impression smear of the liver reveals the presence of coccidia.

Secondary infection can lead to their presence in the nervous system. The disease is often accompanied by secondary bacterial infection, in particular by Escherichia coli. 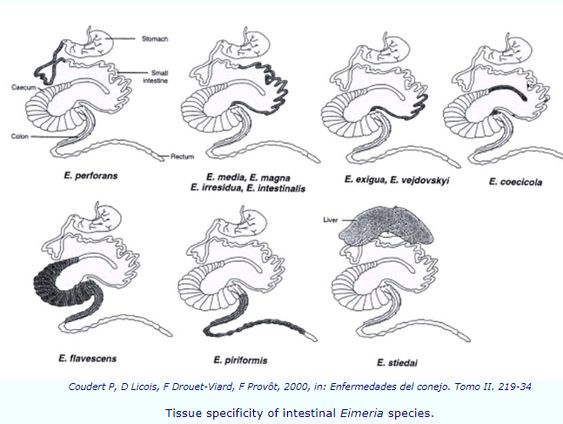 Coccidiosis is very difficult to diagnose. It can be done by fecal flotation, by identifying the oocysts in the feces, or under the microscope by counting the coccidia per gram of feces. Coccidian oocytes may be difficult to differentiate from the rabbit-specific yeast, Cyniclomyces guttulatus.

Robenidine hydrochloride is well tolerated by rabbits, but its regular preventive use over the last 20 years has raised resistance of e.g. E. media and E. magna toward this compound. Further drugs used to treat the parasite include:

Sulfonamide and trimethoprim antibiotics have proven efficacious in the treatment of coccidiosis. They should only be used to cure the disease, never as a preventive measure. The most effective drug is sulphadimethoxine (0.5 to 0.7 g / liter water). It is the well tolerated by pregnant and nursing does. Other sulpha drugs include:

Treatment is best administrated to all the rabbits during a minimum of 5 days. The treatment should be repeated after 5 days.

Treatment of the environment is important (e.g. 10% ammonia). Water crocks and feed hoppers should be disinfected and remain free of rabbit feces. When treating a carpet, vacuum first in order to further penetration of the anticoccidial product. During treatment of the environment, rabbits should be kept in another part of the home to avoid the danger of contact with the products and possible intoxication.

Branches and leaves rich in tannin (willow, hazelnut, oak, ash, fruit trees, eventually pines) are excellent in preventing coccidiosis. Before a rabbit is given a twig to chew, it is important to check that it’s picked from a tree that is not toxic to rabbits. Furthermore, the tree must not have been exposed to chemicals or pollution from busy roads.

All my gratitude to Prof. Richard Hoop (Institut für Veterinärbakteriologie, University of Zurich), Dr K. Hermans (Kliniek voor Pluimvee en Bijzondere Dieren, University of Gent, Belgium), to Michel Gruaz (Switzerland) for the permission to use their pictures related to coccidiosis in rabbits.